On Monday 16th November 2020 Sheila M. Nelson passed away peacefully after being cared for by family for 7 years. She will be remembered with love for her immeasurable contribution to string teaching; by her many students and all those who joined them to play chamber music whether at her home or as part of the Tower Hamlets String Teaching Project; and for her boundless energy, enthusiasm and generosity for passing her wisdom to teachers plus the enormous body of repertoire she has left us. Due to the Covid-19 restrictions for funerals, there will be a small family service and when it is possible, there will be an event in London to celebrate Sheila’s life and legacy.

Sheila was the very first recipient of the ESTA Award for services to String Teaching and throughout her life she was a huge supporter of ESTA through regular appearances giving workshops. Her name will live on in the Sheila Nelson Stringwise Bursary Fund.

“She was that rare creature, a true groundbreaker, and the results of her inspiring work are clear to see in the dizzying number of performing musicians and teachers who count as her progeny.  A musical super-spreader, as it were.”   Sir Simon Rattle 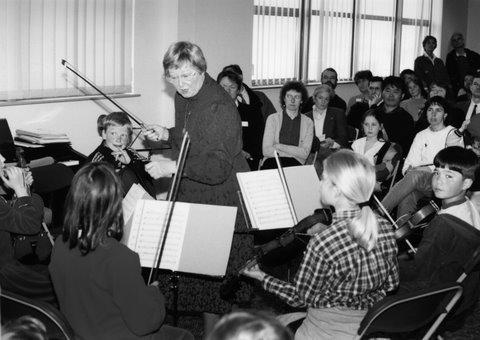 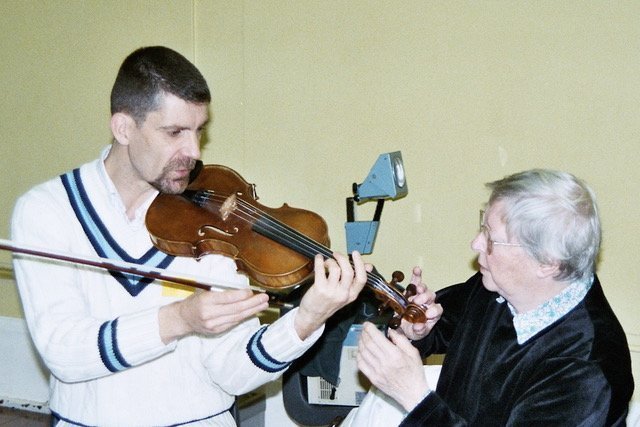 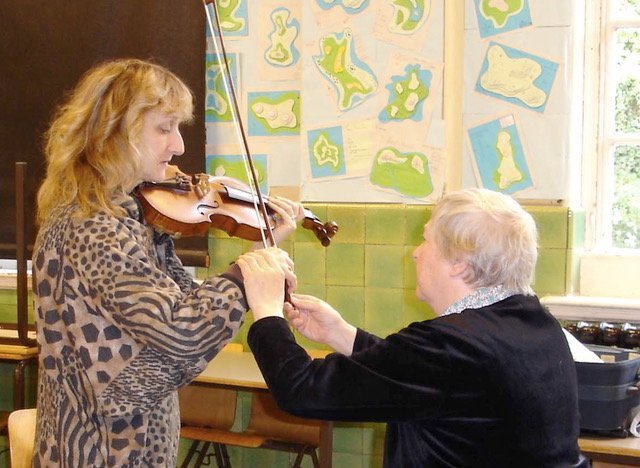 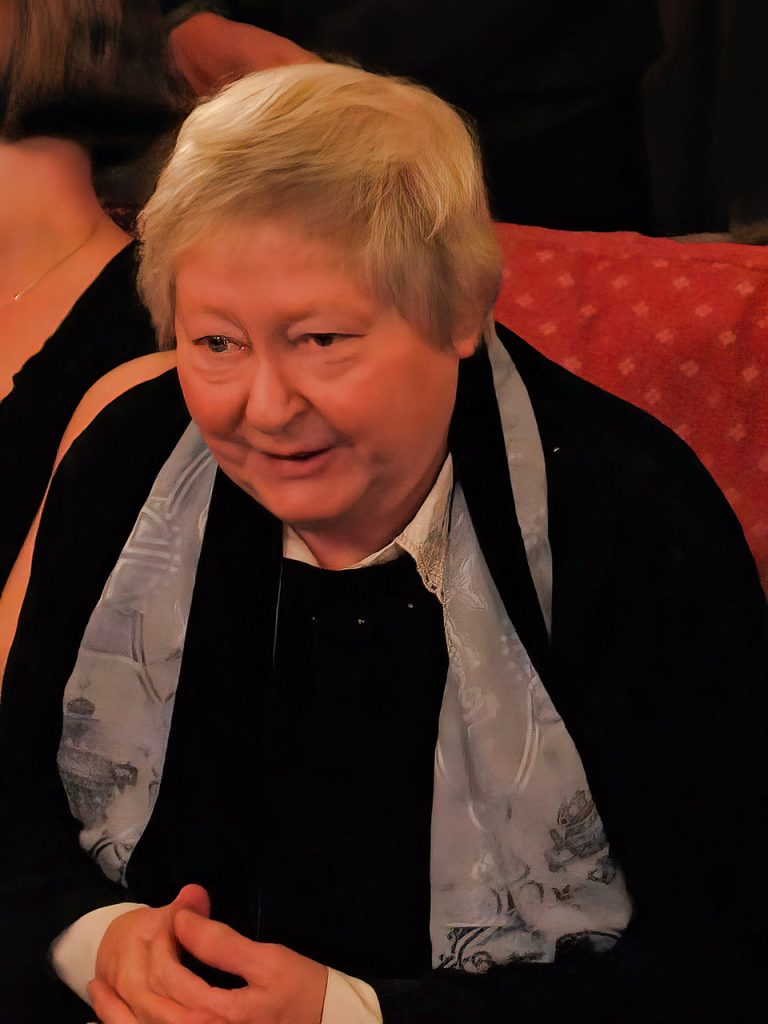 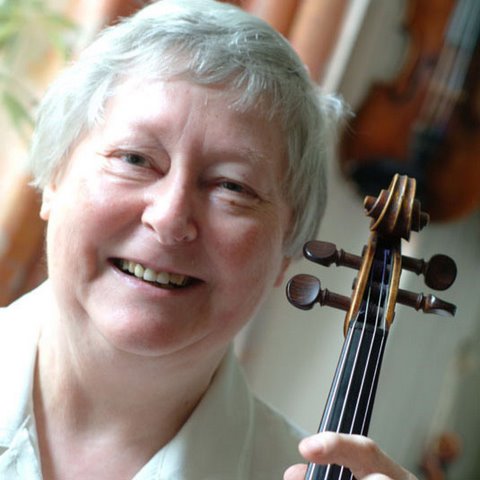 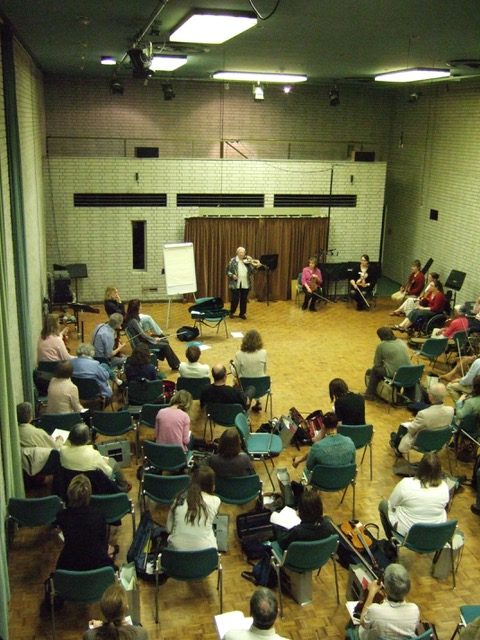 “Like many violinists around the world, I owe the foundations of my playing in large measure to Sheila; but I owe her an even larger debt for the joy I have had from making music for and with other people – which began with Sheila’s emphasis on group playing right from the start.”   David Alberman, principal second violinist, London Symphony Orchestra

In celebration of a lifetime contribution to String Teaching 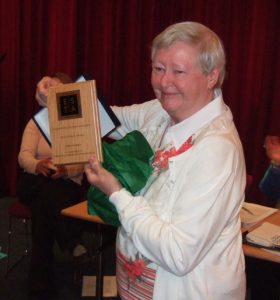 Sheila starting experimenting with teaching on her younger brother well before she taught her first ‘proper’ lessons at the age of 16 and has never stopped. She needs no introduction as every string teacher the world over will have come across her books which cater for all string instruments, starting with Tetratunes, Right from the Start and Technitunes. The volumes of music for chamber groups and string orchestras have delighted many and the more recent Essential String Method and Octotunes books show how she now uses solfa in her teaching. Arguable Sheila has touched the lives of more young string players than anyone else in the UK because so many teachers have been influenced by her through the numerous training programmes she has been involved in the world over. Through the Tower Hamlets Project she developed teaching techniques that even now are being adapted and repackaged by teachers involved in the Wider Opportunities scheme. ESTA thanks Sheila for all her invaluable skills and her humbleness and willingness to share them with the string teaching community.

This video could be Sheila in a play ground during lockdown but is in fact her teaching a class of children from Bonner School, Tower Hamlets, last century!

Sheila Mary Nelson, affectionately known as Sheila M. Nelson by her young students who saw her name written like that on the music they played, was born in Manchester in 1936.

The daughter of Mary and Cyril, an engineer and keen pianist, Sheila had an older brother called John and a younger brother called Michael. She practised her skills as a violin teacher on Michael from a very young age. She was educated at the Manchester High School for Girls, where she was Head Girl in her final year.

Sheila studied the violin at the Royal College of Music in London and simultaneously took a B.Mus degree at London University. Later she studied at the Copenhagen Conservatory and the University of Birmingham. Sheila’s professional life started as a freelance violinist working mainly in chamber orchestras. She was a member of the Menuhin Festival Orchestra and the English Chamber Orchestra, and also played with the Royal Philharmonic Orchestra. Whilst continuing to play, Sheila became increasingly interested in teaching. This is reflected in the chapter ‘Education for Survival’ in her 1972 book ‘The Violin and Viola’ published by Ernest Benn Ltd. and reprinted in 2003. Here she talks about the importance of training teachers and the ‘vicious circle of incompetence which can arise from poor teaching and the perpetuation of incorrect techniques’.

In 1976 Sheila was awarded a Churchill Fellowship and went to the USA to work alongside the eminent violin pedagogue Paul Rolland. On returning to the UK she was invited to lead a String Teaching Project in Tower Hamlets where she famously took the whole class string teaching method she had seen developing in the USA to new heights. From this project evolved a whole series of books for all string instruments published by Boosey & Hawkes. The project also had a pioneering string training programme as an integral part where trainee teachers working alongside experienced teachers in the classroom whilst receiving pedagogic training from Sheila. In 1987, a six-part documentary series called ‘Beginners Please’ was made about the Tower Hamlets Project culminating in a performance at the Royal Festival Hall. Numerous projects around the world took inspiration from this.

Sheila also had a flourishing private teaching studio based on her home in north London with pupils receiving lessons twice a week, a short individual lesson and a longer group lesson. Her students would all descend on her house at the weekend to play in chamber groups augmented by local young cellists. In 1990 her student Nicola Loud became BBC Young Musician of the Year, and many have gone on to careers in solo, chamber or orchestral music, or continued to play as enthusiastic amateurs.

In 2010, Sheila received an award in celebration of her Services to String Teaching from the European String Teachers’ Association. She was also made an Honorary Member of the Royal Academy of Music.

In her final years, Alzheimer’s Disease meant that Sheila was no longer able to teach, and moved in with family who cared for her as the disease progressed. She retained her love of music to the end of her life.

Sheila, in her own words, on Paul Rolland as printed in the 1981 ESTA Review

A triple exposure to the work of Paul Rolland – last year in Exeter, this year in Cambridge, and a month in between spent at his courses in North Carolina and Urbana, Illinois, on a Churchill Fellowship – has left no doubt in my mind that this is the most advanced and the most practical teaching method available today.  Before going to Exeter I had read the books and admired the thoroughness of the approach: the fact, for instance, that the learner does not simply place his finger on the string, he learns right away the angle of placement which will give the best left arm position at that moment.  But although I had been stressing certain identical points in my own teaching for some years – bowing in curves and circles, not planes, for example – I came away from Exeter with what I knew to be an incomplete understanding of the physical origins of these circular and elliptical movements, and of the way small movements are balanced spontaneously within the arm by well-coordinated players.

The fact that these balancing movements, once properly understood, may be taught not only to children but to advanced performers who have lost them (and lost with them that musical spontaneity which goes hand in hand with physical spontaneity), seemed to me the most important development in the string-playing world since I completed my researches in these matters for my book ‘The Violin and Viola’.  I was therefore exceptionally grateful to the Churchill Trust for enabling me to visit the U.S.A. for an intensive teachers course (8.30 am until 10 pm or later each day, with no coffee breaks!) and a further couple of weeks observing Paul Rolland’s work with young people at the Illinois Summer Youth String Camp.

As I watched Professor Rolland working with groups and individuals of standards ranging from elementary to concert performer I became increasingly impressed by the logic of the physical and psychological progress of his teaching.  The fact that the detailed research of the Illinois String Project was directed towards the efficient teaching of children in school groups, and the material has been produced with these in mind, is entirely natural, for what better ages is there for learning the basic skills of the concert performer?  But I personally consider that the real importance of the Project’s work, in tying up the findings of physiologists and motion research experts into a totally logical approach to string playing, is going unnoticed by those who should be most aware of it because, at least in this country, basic string technique is treated as something to be acquired at the college or conservatoire stage and the art of communicating it to the young is largely treated as not worth acquiring at all.

Fortunately, ESTA is gradually managing to counteract the lethargy of our institutions with regard to the training of string teachers, by offering opportunities such as this year’s course at Homerton to its members, and the forty of more who attended were unanimous in appreciating the benefit to their own playing as well as to their teaching.  Sharing the course with the American String Teachers’ Association allowed some international discussion on method and organization, and a wide range of visiting artists and lecturers added various musical or philosophical facets to the basic technical content of the fortnight.  We do not all need to visit the U.S.A. to learn about Paul Rolland’s teaching, but I do think that it needs personal contact with him or one of his associates to bring to life the very detailed material in the books, and cellists will be pleased to hear that Joan Dickson has been working alongside Professor Rolland both in America and at Cambridge.  I trust that ESTA will manage to ensure at least an annual visit from him for some years, for who else could communicate such a wealth of valuable material to such a large group of people in such a brief time and with such a sense of humour.

A number of this country’s best known private and peripatetic teachers could be seen at Cambridge, listening, playing, learning, discussing and appreciating.  When a comparable number of teachers from our advanced institutions can be seen at a similar course, I shall feel that not only is Paul Rolland receiving the attention he deserves, but that these institutions are finding a more realistic concept of their role in this country’s musical education.